But before we start the topic, let us understand the background of it with a simple example. Let us assume one scenario.

Suppose, if have two friends. They both are good to sort things in a particular order. But one of your friends is weaker than the other one to sort anything. He can only sort a particular thing at a time. Whereas your other friend can sort many items at a certain time.

Now, you need to sort three items in a very small time. Whom will you ask to help you in such a case?

You will ask the second friend who can sort many items at the same time. This is the basic background of Comparable vs Comparator Java. Keep this theory in mind. It will help to understand the topic in a good manner.

But before we start making the differences between Comparable vs Comparator in Java, let us first know about them briefly.

There are two interfaces in Java for sorting purposes. In between them, Comparable is an important one. Sorting any one type of data in Java is a very easy task. But when we need to sort the data into different data types, it becomes a difficult one. When we need to compare a set of things by any of the data, this interface can help.

Comparable is like your friend who can sort any one item at a given time. Comparable can be used to sort the lists of elements by using any one item. It is a very easy sorting interface. It uses the compareTo() method. It is the same method that we used to compare two strings in Java. Also, in this case, while sorting it modifies the original class elements. That may create problems at some point in time.

Many developers used it for sorting such cases. But it has one drawback, it can’t able to sort the list by the many data types at the same time. For that purpose, we need to take the help of a Comparator.

Comparator is another sorting interface in Java. It also uses for the same purpose as the Comparable. It is also used for sorting the list of elements. It sorts the elements by the different types of data types at the same time. It consumes a small amount of time to complete the process.

A Comparator is like your other friend. The friend who can sort many items at a certain time. As Comparator can sort the items in a certain time, many developers implement Comparator in their code. It is quite difficult compared to the Comparable method. it uses the compare() method. This method is difficult to implement. Also, it doesn’t change the original class elements there.

Let us develop the table & acquire some more knowledge from it.

Differences Between The Comparable vs Comparator:

Implementation Of Comparable In Java:

After we know the differences between the Comparable vs Comparator, it is time to know how comparable works. For knowing that, we have to implement a Comparable code.

We have to develop two important parts there.

Above are the code snippets. If needed, you can go through this provided here. This will help to clear the differences between Comparable vs Comparator. The probable output of the above code will be the following.

Implementation Of Comparator In Java:

Above are the code snippets. If needed, you can go through this provided here. This will help to clear the differences between Comparable vs Comparator. The probable output of the above code will be the following. Also, if you are looking for Homework Help Java then you can contact codingzap for the same. 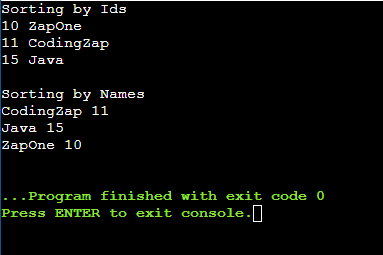 As we saw differences between Comparable vs Comparator are very important.

We have to clear the basics of the Java programming language to understand the concept in a good manner.

As per the choice of the individual, they can use any method mentioned above. It is a very useful implementation.